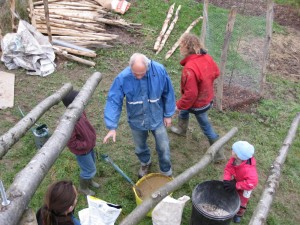 We had planned to plant our trees with the latest permaculture design from Bryn and Stephan at Brighton Permaculture Trust, but a biodynamic angel descended on us, bringing the cosmos into the soil…
We had received funding from Gatwick Airport Community Trust Fund and bought for each tree:

We also had collected as many newspapers as we could from the local tip and community bins.

We prepared the site before the trees arrived by getting materials to the site, hammering in the stakes for the protection. This was a lot of work and on the day of planting and afterwards we still had cubic metres of compost and bark mulch to wheelbarrow down to the forest garden.

The biodynamics came in when we began to consider how to improve the soil. Instead of using rootgrow, we decided to be guided by Hans-Guenther, biodynamic expert in mixing up a root paste and enriching with soil. Hans-Guenther showed the Forest Garden Group how to plant a tree the day before so that we had several people facilitating the community tree planting. He also gave a demonstration to everyone on the day. We spent the morning getting compost and bark mulch to the site and with the demonstration. We had lunch and then began planting trees. We had a planting scheme and supervised where each tree went.

For the root paste, we mixed: 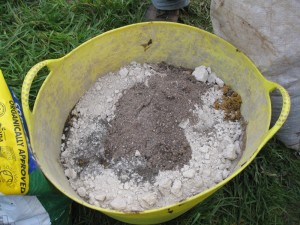 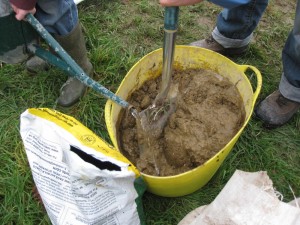 We added ash and hoof and horn to the compost and top soil we put back into the planting hole and put the tree stake into the hole. 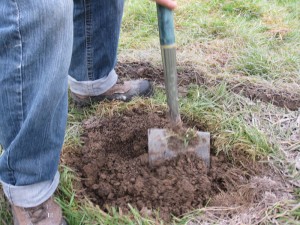 We dipped the roots in the root paste.

We planted each tree on a mound and built up a mulch of a layer of newspaper, compost and bark around them to prevent grass from competing with them and to slowly feed them. 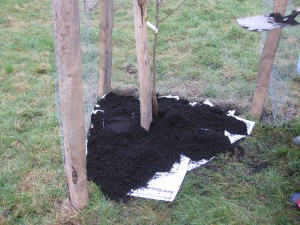 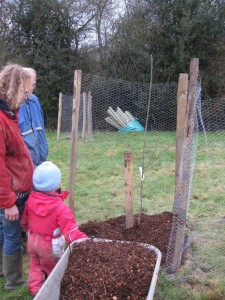 We pruned the trees branches to be in balance with their roots, which were also pruned to cut out upwards growing or broken and dying branches. We left the central stem to encourage a natural shape in keeping with the forest garden. We cut the branches diagonally.

We stirred and sprayed a biodynamic preparation. 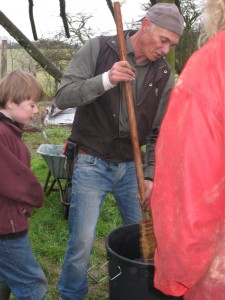 We used the stakes to support the deer and rabbit protection. This is strong and will provide the necessary protection for the growing trees for many years.