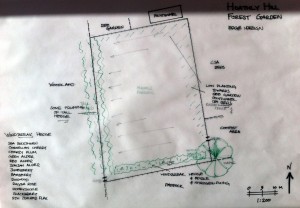 We designed the visible and invisible boundaries at the same time. We followed Martin Crawford’s design process by first establishing the boundaries, pathways and clearings and at the same time we were working on how we work together as a group, who we would involve the community in the design process, how to transition from the previous use and users to another project and group: a time for crossing and establishing boundaries.

There was an existing fence with rabbit-proofing in need of repair. Our first activity which changed the site (ie apart from our observation, visioning and appreciation activities on site) was to repair the rabbit-proof fence.

In our second winter, there was increasing deer activity in the Forest Garden and beyond into the community. There has been much consultation on ways of disencouraging deer. A deer fence is currently being explored to protect the community’s growing area and western boundary.

To the north, element of earth and season of winter, the site borders the polytunnel currently used by the Community Supported Agriculture scheme and the bee area.

We were careful not to place tall trees in front of the polytunnel, looking at sun elevation through the seasons and slope factors.

At the time, the Hoathly Hill Bees had been left to their own devices for many years, but there was a sudden flare up of interest in them from many different people in the community, perhaps caused by a recent showing of the film, The Queen of the Sun in the neighbouring village, perhaps on a different wavelength of communication as the bees were under attack from mice. The Forest Garden Group intended to integrate the bee area into the design, but responded to a wider interest in the community for working with the bees and left the designing to the newly formed Bee Group, although there is much integration between the two groups. The Bee Group was more loosely formed with queen bee, Ioonah, natural beekeeper living nearby who flew in and took over just when we needed her, allowing different perspectives and intentions of her worker bees to manifest. Some people were interested in working with the bees directly, making sure the hive was in order for the bees, repairing and improving their home and surroundings. Some people were interested in creating a garden for the bees. Others were interested in reading Steiner’s lectures on bees. Others celebrated the bees in poem, song and play.

To the east, element of air and season of spring, we have the Community Supported Agriculture beds and the community allotment beds.

Here we are also concerned not to shade the community’s vegetable beds with tall plants near the border. We are however benefiting the vegetable beds by creating a windbreak in response to a very windy site. We also aim to complement and expand existing food production with the focus on fruit, herbs and perennial vegetables.

To the south, element of fire and season of summer, we have Ashurst Field, informally known as the ‘The Fifteen Acres’, worked by two community members for many years as a hay meadow.

Here we are responding to sometimes high winds and we have grazing animals, potentially popping their heads over the fence. We met with the two community members to discuss options for having their sheep graze the land and creating a hedge on this border and the border to the west. In the end we decided to create an edible windbreak set back from the existing rabbit-proofed fencing to allow the hedge to establish itself and in the meantime provide a walkway for walkers crossing the site from the community to the public footpath.

To the west, element of water and season of autumn, we have a high hedge predominantnly of holly, blackthorn and hazel, bordering a public footpath on land owned by our neighbours. A depression, perhaps a previous or underground waterway runs parallel to the border.

Some twenty years ago, the hedge had been started to be laid, but since then, left to grow naturally. Hedgelaying was considered on various occassions, but after consulting with our neighbours, we found they did not want to lay the hedge as they felt it would make maintenance of the footpath and woodland on their side more difficult. There was however much enthusiasm for giving the hedge a good prune, which gives us more space for the forest garden. The planting design uses this edge by planting trees suitable for woodland edge so that the forest garden will merge into the woodland.