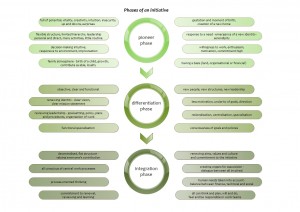 According to this model, Hoathly Hill was at the differentiation stage:

The feelings I have picked up on in the community is one of pain from past and still living conflicts; resentment towards certain people and certain ways of doing things; looking to the past as the golden age; despair at the current lack of community and anthroposophical initiative; dis/satisfaction with the way things are; un/willingness to review or change things.

In 2012, Hoathly Hill Community had its fortieth birthday!