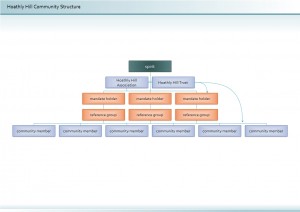 Above is an outline of the structure of Hoathly Hill Community. There are two legal entities: Hoathly Hill Association and Hoathly Hill Trust. There is a mandate system in operation. This was introduced to replace a consensus decision-making model previously used in order to facilitate decision-making. There are many ‘mandates’ for community activities: Community Meetings, Membership, Soft Landscape, Hard Landscape, Car Parks, Development, Finance, Community Buildings, Renewable Energy, Animals, The Pond, Trust Land, The Main House, The Bulletin. There are also several tasks: Insurance, Saturday Cafe, Bookings of Community Buildings, Recycling, The Greenhouse, Bees, CSA Scheme, The Herb Garden, Composting, Biodynamic Preparations.

The mandate holders are responsible to Hoathly Hill Association and hold their position for a maximum of three years, although in practice up until now many have held their positions for much longer. They are also required to review their mandates every year, which is currently scheduled by the Community Meeting Mandate Holder.