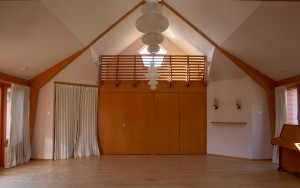 Part of the observations stage included many hours of being in the building for many community and special events. It is interesting that the building and the main space can feel very different on different occasions: what people bring to the space has a profound effect on how it feels as a space. I think, however, it also shows that the space can accommodate different activities and in general is an open, light and comfortable space.

Nic Pople, architect of Arc Hall, was invited to speak about the building at an open morning for the new kindergarten in July 2014.

He was a resident at Hoathly Hill at the time the project was conceived. Rudolf Steiner’s lectures, collected in Architecture as a Synthesis of the Arts, was a profound influence on the design process. Key points of his talk were: 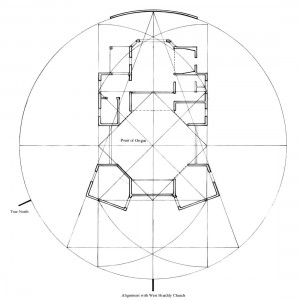 The whole ground floor and the outside patio is used to house a kindergarten.

The space is used multi-funtionally, but still often stands empty in the afternoons, evenings, weekends and school holidays.

The office is used as a storage space by the community’s organisations for their documents: Hoathly Hill Association, Hoathly Hill Trust, Hoathly Hill Renewable Energy. There used to be, but is no longer, a phone line, internet connection, a computer, a fax machine, a photocopier. It is hardly used.

The attic space is used as a library and meeting space. Also very occasionally used. 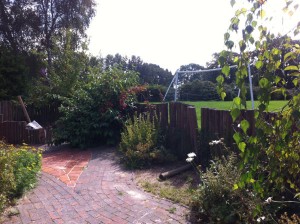